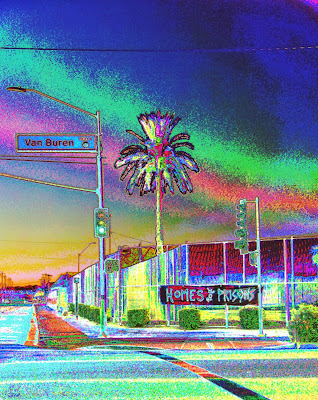 In its initial FY15 budget request to the Governor, the Arizona Department of Corrections (ADC) asked for legislative approval to contract out another 1,500 medium-security prison beds to a private, for-profit corporation.

This is in addition to the 2,000 private prison beds that are just beginning to come online. That contract was awarded to Corrections Corporation of America for its Red Rock Facility.

ADC is also in the process of bidding out construction of 500 maximum security beds, despite the fact that during FY 2013, ADC had an operational surplus of 322 maximum beds and projected no change in operational capacity for FY2014. This project will cost a minimum of $50 million in construction costs, to say nothing of operating costs.

And, wasn’t the state prison population going down?

Yes, it was. Arizona’s  prison population peaked in 2009 at 40,766 inmates. During the subsequent two years, that population declined by an average of 25.5 inmates per month, to a total of 40,154 on October 31, 2011. For Fiscal Year 2012 it essentially flatlined, and this was predicted to continue through 2013.
But mysteriously, the Department of Corrections recently reported that the population increased in 2013 by 800 prisoners.

What is behind this unexpected increase in prison population?

In short, there were more admissions, fewer releases, and longer lengths of stay in 2013. It’s not just that more people went to prison in 2013, it’s that fewer people got out.

Under Arizona’s ‘truth in sentencing’ law, prisoners may receive “earned release credits,” allowing them to be released after they have served 85% of their sentence. The Department of Corrections (DOC) has the sole discretion in the award of these credits, and there are many exemptions and opportunities for credits to be withheld.

For example, credits may be forfeited if a prisoner “fails to comply with Department rules, resulting in being reclassified to a higher risk status.” Classification is an entirely administrative matter, with no outside review, based in some cases on the number of tickets awarded for major and minor infractions.

This is a particular concern for prisoners with mental illnesses or developmental disabilities, who are literally incapable of controlling their behavior. These prisoners get tickets for misbehavior and ultimately are classified as “high risk,” landing on yards where they are no longer eligible for educational, work, or treatment programs.

The policy also allows for forfeiture of credits for inmates who fail to “demonstrate a continual willingness to volunteer for or successfully participate in work, education, treatment, or training programs.” This is a highly subjective assessment, often made by guards at the unit level. There have been cases of guards awarding tickets or writing up prisoners in retaliation for perceived personal slights or because they “don’t like his attitude.”


The Department of Corrections reported that in December of 2012, it held 9,642 non-violent offenders who were US citizens and therefore eligible for the program. So, in 2012, less than 12% of potentially eligible prisoners were referred to the Transition program.

Is it possible that the Arizona Department of Corrections is deliberately keeping people longer in order to secure its budget allocation?

As we have reported here at Cell-Out Arizona, the Department of Corrections has a history of using “fuzzy math.” In 2010, ADC changed the way it reported the number of “violent” inmates in custody. As a result, ADC claimed that the percentage of violent prisoners had gone up, which conveniently bolstered its request for more high security beds. It’s not unreasonable to suggest that ADC would use similar shenanigans to ensure its substantial share of the General Fund (11%).

Finally, any good business-person knows never to base your future predictions on one year’s statistics. Why assume that just because the population rose modestly in 2013, it will continue to do so?

AFSC submitted a public records request to the Department of Corrections for the data they used to compute their population projection numbers. In addition to ADC population statistics from the past three years, they also sent statistics from the Maricopa County Jail. Maricopa County sentences more people to prison than any other jurisdiction, so it stands to reason that the number of people accused of a felony crime awaiting trial in the jail would be a predictor of the future prison population.

What ADC did not take into account are the numerous reforms taking place in Maricopa County and elsewhere, specifically designed to reduce the prison population. Drug and Mental Health Courts, diversion programs, and other alternatives to incarceration can have a huge impact—as has been demonstrated in many other states over the past few years.

Arizona’s probation reforms, prompted by legislation in 2008, were largely credited with the dramatic reduction seen in prison populations in 2010 and 2011. Counties were revoking fewer people on probation and parole, choosing intermediate sanctions over sending them back to prison.

Maricopa County Attorney Bill Montgomery recently touted these and other programs in an Op-ed to the Arizona Republic. He writes:


“Arizona has also led the way in diversion programs for drug offenders. Since April 2011, the county has offered diversion to over 6,000 drug offenders, consistent with Arizona law requiring treatment for first- and second-time drug offenses. Last year, other county attorneys and I supported legislation giving us the discretion to offer diversion to drug-possession offenders with a prior drug conviction.


More recently, Maricopa County’s criminal justice agencies began exploring ways to minimize jail time for low-risk inmates who will receive probation and providing rehabilitative services to inmates with a high recidivism risk. These efforts are geared to produce savings to taxpayers without jeopardizing public safety. Clearly, Maricopa County and Arizona have led when it comes to reforming the criminal justice system and will continue to do so.”


These and other programs hold the promise to reduce prison populations in Arizona, save taxpayers millions, and improve public safety. Arizona—once again exemplifying the definition of insanity—is racing in the opposite direction, flushing millions of dollars annually down the private prison toilet.
Posted by Margaret Jean Plews at 2:00 PM