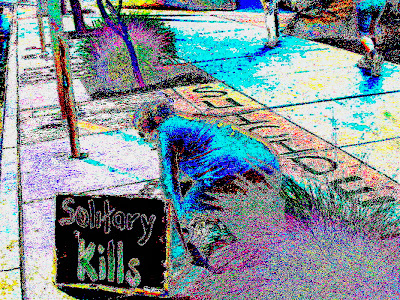 AZ DOC prisoner Nelson Douglas Johnson III died of asphyxiation in a filthy isolation cell at ASPC-Florence within months of staging a hunger strike to protest conditions in his prison. His sister Stephanie remembers him here, on the Day of the Dead Prisoner, November 1, 2012, at the Maricopa County Court Complex...

The AZ prison suicide and homicide rates doubled under the present administration
of DOC Director Charles Ryan, and have remained high for the past 4 years. Consequently, the ACLU and several other parties already have a class action suit lodged against the Arizona DOC for abusing mentallly ill prisoners by placing them in isolation cells and for showing deliberate indifference to their medical and psychiatric care needs.

Friends and families of AZ Prisoners: read up on this, and share it with your loved ones...and help us organize direct actions in AZ as well. Contact Peggy Plews at arizonaprisonwatch@gmail.com


Greetings to all Pledge signers,

Thank you for your support of the hunger strikers. As you may have heard, the hunger strike began on July 8 with California 30,000 imprisoned people refusing to eat. Hundreds of media outlets have been covering this historic event.

The California Department of Corrections and ‘Rehabilitation’ (CDCr) has begun to retaliate against the vocal spokespeople for the hunger strikers, who are located in Pelican Bay and Corcoran State Prisons. Our Pledge of Resistance Alert today will focus on the extreme brutality of prison authorities against the Representatives of the hunger strikers, who are in Pelican Bay State Prison.

The CDCr is also trying to undermine legal and community support of the hunger strikers. They have just issued ‘banning’ orders to Marilyn McMahon, an attorney for many of the Reps in Pelican Bay, denying her access to her clients.

Most likely, prison officials will not be thrilled to get your phone calls and emails, so please be determined and polite in trying to send your phone and email messages. Whether you get a voice or a voice mail, they will know you are watching them, and want them to Stop the Torture.

RETALIATION AGAINST PELICAN BAY PRISONER REPRESENTATIVES:
On July 11, PBSP prison authorities removed 14 prisoner Representatives from their solitary confinement (SHU) cells and placed them in Administrative Segregation (Ad Seg) cells which are even worse than the SHU. The hunger strikers, many of whom are elder men and have severe chronic illnesses, are dressed in summer clothing, but the CDC has turned on air conditioning full blast, leaving some of the men sick and freezing.

Meanwhile, the prison officials have raided their SHU cells and confiscated their legal materials, including attorney-client protected documents pertaining to their highly publicized federal class action lawsuit against the state of California (Ruiz v. Brown).

RESPONSE OF THE HUNGER STRIKE REPRESENTATIVES:

“On July 11, 2013, we were placed in Administrative Segregation (Ad-Seg), where we are subjected to more tortuous conditions than in the SHU. Despite this diabolical act on the part of CDCR intended to break our resolve and hasten our deaths, we remain strong and united! We are 100% committed to our cause and will end our peaceful action when the CDCR signs a legally binding agreement meeting our demands.”

Governor Brown has been completely silent on the hunger strike while it has gained international news attention. He is now taking a vacation in Europe, visiting, among other places, Dachau concentration camp in Germany, and promoting California’s environmental advancements to selected European audiences.

WHAT YOU CAN DO TO HELP STOP THE TORTURE:

Tell the PBSP prison authorities to return the 14 prisoner Representatives to their cells. (Their names and prison numbers are at the end of this email.)

Return all their property, especially the legal documents guards have confiscated.

Lift the ban on their attorney, Marilyn McMahon, so that she can again access her clients.

Medically monitor the men to ensure that the prison has not destroyed their health!

Please write to the Reps.* Include one sheet of paper, one envelope and one loose stamp so they can write someone outside the walls. You can address your letter with the person’s name & prison number; Pelican Bay State Prison/SHU; PO Box 7500. Crescent City, 95532.

*Mr. Arturo Castellanos may not be able to receive your letter. He’s on ‘restricted mail,’ by the prison authorities.

Thank you so much for your solidarity, 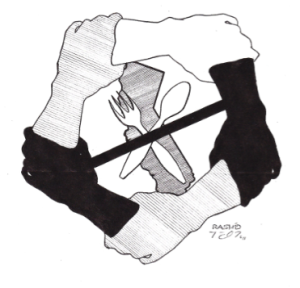 The hunger strike has been organized by prisoners in an inspiring show of unity across prison-manufactured racial and geographical lines.

The changes the prisoners are demanding are standards in other Supermax prisons (eg, Federal Florence, Colorado, and Ohio), which supports the prisoners’ position that CDCR’s claim of such demands being a threat to safety and security are exaggerations. The hunger strikers** have developed these five, straight-forward, core demands, as shown below in their own words:

1. End Group Punishment & Administrative Abuse – This is in response to PBSP’s application of “group punishment” as a means to address individual inmates rule violations. This includes the administration’s abusive, pretextual use of “safety and concern” to justify what are unnecessary punitive acts. This policy has been applied in the context of justifying indefinite SHU status, and progressively restricting our programming and privileges.

Examples include:
**Signed by

Take Action NOW to support the hunger strikers in winning their demands!