"Me Party" Mantra in AZ: "We want Prisons not Homes". 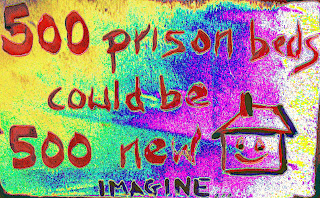 Wonder what my community could have done with $50 million this year? For sure we'd have given our disabled and chronically ill people medical care, built some housing, gotten some folks off the streets and out of the grips of both those who victimize and those who criminalize them...we could have done a lot with that money. Instead Arizona is building a new Supermax and adding 500 more private prison beds (they usually take the low-level drug users and drunk drivers who could have gone to a treatment program instead - if we had any for those who can't pay, that is...).

For those who think they get drug and alcohol treatment in prison - think again. The DOC says 75% of their prisoners last year came in because of drug/alcohol related problems. How many of the 60,000 prisoners they saw altogether got any treatment?

From their own report:

Wow. Where does it all go?

Well, thanks to the Tea Party we get another 500 hundred prison beds for low-level offenders, and the state had plans already for another 500 Supermax beds for the mentally ill we're denying community-based and hospital care to in this state. Brilliant strategy, suspending compliance with Arnold -v- Sarn because of a budget crisis, while pouring all sorts of new dough into the prisons where you plan to put us instead. They don't put the hard-core gangsters all in lock-down, that's for sure - no one would be left to run the prison yards if they did - the guards aren't in control...


I am tired of the political cat and mouse game that Tea Party Republicans are playing with the Arizona Attorney General’s Mortgage Settlement Fund. It was wrong to sweep money from the fund to benefit the private prison industry at the expense of Arizona homeowners.
Earlier this year, Tea Party Republicans stole $50 million from a fund that was created by a joint settlement between 49 states, the federal government and the country’s five largest residential mortgage loan servicers who allegedly engaged in fraudulent loan and foreclosure practices. The money was supposed to be used for foreclosure prevention programs in Arizona to help families hit hardest by the mortgage crisis.

Instead, $50 million was swept into the general fund and can be used to pay for things like the expansion of private, for-profit prisons. Coincidently, this year Republicans approved spending $50 million between now and fiscal year 2014 to build 500 new beds in private prisons.

Here are my questions: How many families would be able to keep their homes if that $50 million were being spent on them instead of on 500 new prison beds? Also, do prison beds really cost $100,000 a piece? It seems to me that $100,000 is closer to the cost of a house than a bed.

This is a clear indication that Tea Party priorities are with the private prison industry. Tea Party Republicans knew that sweeping this fund was going to result in lawsuits and they did it anyway.

As soon as the fund sweep became public, there were reports that the Arizona Attorney General’s Office sent Republican leadership a memo citing legal objections to the sweep.
Republicans have refused to share this memo. A group of Arizona residents affected by the mortgage crisis is suing to stop the fund sweep and requested a copy of the memo as part of the legal proceedings. The Republicans refused, claiming that it was privileged information. A judge subsequently ruled that the memo was not privileged but stopped short of ordering them to turn over the document.

The very fact that Republicans were working so hard to keep that memo from seeing the light of day is another indication of their misplaced priorities. They are playing hide-and-seek with the court while people are losing their homes.

Arizonans deserve leadership they can count on and who shares their priorities. House Democrats remain focused on creating jobs, improving education and helping communities get and stay strong.

— Chad Campbell, a Phoenix Democrat, serves as minority leader in the Arizona House of Representatives.
Posted by Margaret Jean Plews at 11:32 PM