Corrections Corporation of America won the DOC contract for 2000 new beds. Is it any wonder?

This should trouble AZ Regents Dennis Diconcini and Anne L. Mariucci - they will profit from the prisons that are funded with money that could have otherwise gone to Arizona's educational system. But I doubt they will do much but celebrate this news.

And of course, we all know about Jan Brewer's ties to CCA.

As for the City of Eloy - it's essentially owned by CCA, and its prisons seem to be a haven for abusive people (the ones in the brown uniform, that is). CCA is already being sued for serious abuse of their Hawaiian prisoners at Saguaro prison in Eloy AZ, among other things. They seem to have particular problems with sexual predators working in their prisons in that town. One Saguaro guard was recently convicted of forcing a prisoner to give him a blow job. And the ICE facility in Eloy run by CCA is being sued for abusing a transgender detainee. I don't think that was the best town to trust with more of our prisoners. 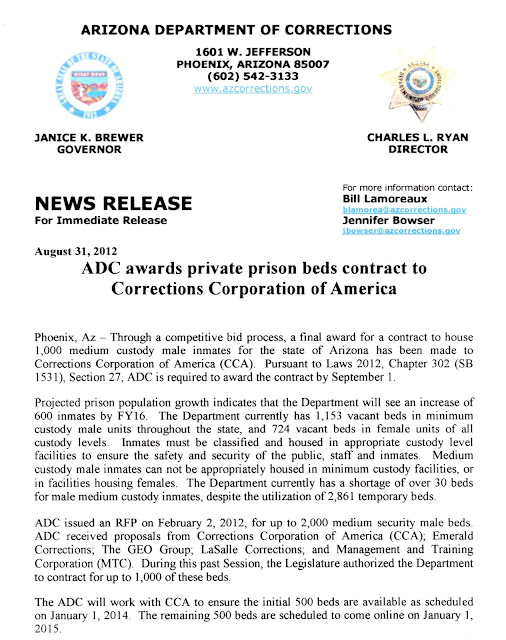 Why are we building private prisons when crime is down?

On Friday, the state of Arizona plans to award one lucky – or perhaps just well connected -- company the contract to build and operate 1,000 private prison beds for medium security inmates.

This, despite the fact that we have 2,000 empty beds and the overall crime rate is down.

This, despite the fact that it actually costs taxpayers more to operate  private prisons.

This, despite that fact that it’s been only two years since three inmates escaped from a private prison in Kingman, murdering an Oklahoma couple in New Mexico. That prison, which was later found to have a number of deficiencies (clearly), was run by Management & Training Corporation.

Yep, Management & Training Corp. is one of the five out-of-state companies in the hunt for the lucrative contract to be awarded on Friday. Another of the bidders is Corrections Corporation of America, whose lobbyist is no less than Gov. Jan Brewer confidante, Chuck Coughlin. Among others, that is. All five companies employ a phalanx of lobbyists to roam the Capitol hallways.

Apparently, it pays off.

“The Attorney General’s Office has the power and an obligation to intervene before that contract is signed and nothing is being done,” Campbell said. “We should not be rewarding out-of-state, for-profit prison companies with contracts if they are violating the law and wasting taxpayer money.”

Among the possible violations, Campbell says, is a requirement that any proposed private prisons save taxpayers’ money while providing the same or better quality prison digs.

Yet a report this week by The Republic’s Craig Harris suggests that private prisons are nearly 10 percent more expensive to operate.  The average daily cost per inmate in a state-run medium-security prison in 2010 was $48.42 while the cost in a similar private prison was $53.02.

Corrections Director Charles Ryan says the savings come in having a private company foot the bill to build the prison.

So says the man with 2,000 empty beds – some of which surely could be reconfigured to hold drunk drivers and other non-violent criminals.