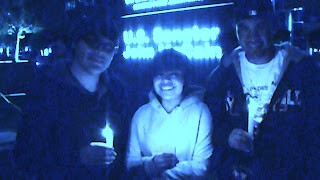 These three are among the bravest, finest youth in America. John McCain and the US Senate have shamed us all.


Carlos, Marlene, and Francisco: I'm so sorry. I pray that someday all your DREAMS come true. This land desperately needs more good souls like you...

WASHINGTON - December 18 - This morning, in a procedural vote requiring 60 votes to advance the legislation, the U.S. Senate voted against the DREAM Act by a 55-41 margin, effectively shutting the doors of opportunity to thousands of bright and talented young people who grew up in America and wanted to give back to the country they call home.

The following is a statement from Frank Sharry, Executive Director of America's Voice:

To those who did the right thing and voted for DREAM, you had our back and we'll have yours. But to the majority of Republicans and the handful of Democrats who voted against the best and the brightest of the Latino immigrant community, your vote against DREAM will be remembered as long as you are in politics. Many of you have expressed your sympathy for the DREAMers. But today we did not need your sympathy. We needed your vote.

As disappointed as we are in those who slammed the door of opportunity on talented young people who are Americans in all but paperwork, we are buoyed by the nationwide outpouring of support for this cause, the unprecedented mobilization in support of DREAM across the nation, and the leadership and courage of the DREAMers who came to Washington to insist on making their DREAM come true.

We get stronger every day. We may have lost this battle, but in the war between justice and injustice, inclusion and exclusion, courage and cowardice, victory is not a matter of if, but a matter of when."

###
America's Voice -- Harnessing the power of American voices and American values to win common sense immigration reform. The mission of America’s Voice is to realize the promise of workable and humane comprehensive immigration reform. Our goal is to build the public support and create the political momentum for reforms that will transform a dysfunctional immigration system that does not work into a regulatory system that does.

"Our strategy should be not only to confront empire, but to lay siege to it. To deprive it of oxygen. To shame it. To mock it. With our art, our music, our literature, our stubbornness, our joy, our brilliance, our sheer relentlessness, and our ability to tell our own stories..."

Posted by Margaret Jean Plews at 8:20 AM