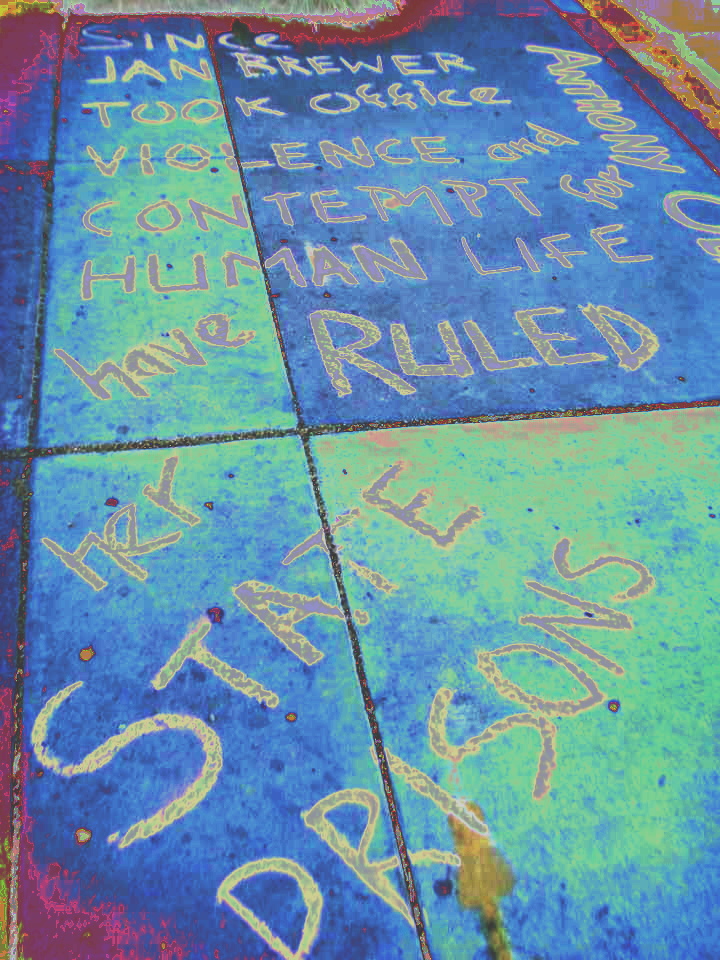 This first press release is just in from the ACLU of Arizona. I think the DOC is getting off easy without having a public trial, but it saves money and time to do this instead. They were definitely going to lose...

The second press release is from the head of the AZ DOC, Charles Ryan, the guy who was named in the suit. Sounds like he won the lawsuit or something. These are vastly different accounts of the settlement. My bet is that the AZ DOC put the most spin on their version, but it concerns me that they say the following:


" “This is positive news,” said ADC Director Charles Ryan.  “On the eve of trial, the plaintiffs in this case have essentially agreed that the department’s current policies and practices, along with recent enhancements to programming opportunities, adequately addresses the plaintiffs’ concerns relating to constitutional healthcare and conditions of confinement for maximum custody and mentally ill inmates. "

" ADC will monitor its own compliance, thus avoiding costly court oversight, and the Plaintiffs’ attorneys, through record review and on-site tours will confirm compliance, as well."

I'm going to have to read the settlement docs myself and get back to you all with another analysis..

PHOENIX – The American Civil Liberties Union, the ACLU of Arizona, the Prison Law Office, and co-counsel today filed a settlement agreement in their class-action suit on behalf of more than 33,000 prisoners in Arizona’s state prisons. Under the settlement, the Arizona Department of Corrections must fix a broken health care system plagued by long-term and systemic problems that caused numerous deaths and preventable injuries. The settlement will also allow prisoners in solitary confinement who have serious mental illnesses to have more mental health treatment and time outside their cells, and will make other critical reforms in prison conditions.

“The Arizona Department of Corrections worked with us on a settlement that shows a commitment to protecting prisoners’ physical and mental health,” said David Fathi, the Director of the ACLU’s National Prison Project. “We hope other states will now find ways to provide adequate medical, mental health, and dental care to their prisoners.”

“The Arizona Department of Corrections has agreed to changes that will save lives,” said Don Specter, Director of the Prison Law Office. “This settlement will bring more humane treatment for prisoners with serious health care needs, and the potential for their conditions to improve rather than worsen.”

The settlement in Parsons v. Ryan requires the Arizona Department of Corrections (ADC) to meet more than 100 health care performance measures, covering issues such as monitoring of prisoners with diabetes, hypertension, and other chronic conditions; care for pregnant prisoners; and dental care.

The settlement also requires ADC to overhaul the rules for prisoners with serious mental illnesses in solitary confinement. Instead of spending all but six hours a week in their cells, such prisoners will now have a minimum of 19 hours a week outside the cell, and this time must include mental health treatment and other programming. ADC must also restrict guards’ use of pepper spray on these prisoners, using it only as a last resort when necessary to prevent serious injury or escape.

The settlement provides for ongoing monitoring and oversight by the prisoners’ lawyers to make sure the state is complying with its terms.

The groups filed the federal lawsuit in 2012, challenging years of inattention to the health needs of state prisoners and improper and excessive use of solitary confinement, resulting in serious harm and unnecessary deaths. Judge Neil V. Wake of the U.S. District Court in Phoenix certified the case as a class action in March 2013, and the U.S. Court of Appeals for the Ninth Circuit affirmed that ruling in June 2014. Last month, the groups filed reports by nationally recognized experts in corrections and in medical, mental health, and dental care, showing system-wide problems with the prisons’ health care and excessive use of solitary confinement.

In addition to the ACLU and the Prison Law Office, other attorneys on the case are Perkins Coie, Jones Day, and the Arizona Center for Disability Law, which is also a plaintiff in the case.


Click here for a copy of the SETTLEMENT stipulation filed today with the court.

Click here for a copy of the EXHIBITS to the stipulation.

For information about the ACLU’s National Prison Project:
https://www.aclu.org/prisoners-rights

For information about the Prison Law Office:
www.prisonlaw.com

For information about the Arizona Center for Disability Law:
http://www.acdl.com/

PHOENIX (Tuesday, October 14, 2014) – The Arizona Department of Corrections (ADC) has reached a settlement agreement in collaboration with the ACLU, Prison Law Office and ACDL prior to the pending trial.

The parties have agreed to approximately 100 performance measures applicable to medical, mental health, dental and conditions of confinement.

“This is positive news,” said ADC Director Charles Ryan.  “On the eve of trial, the plaintiffs in this case have essentially agreed that the department’s current policies and practices, along with recent enhancements to programming opportunities, adequately addresses the plaintiffs’ concerns relating to constitutional healthcare and conditions of confinement for maximum custody and mentally ill inmates.

“In regards to those issues, the settlement notwithstanding, it’s unfortunate that the plaintiffs continue to use rhetoric such as ‘solitary confinement’ to describe housing for some inmates.  No such confinement exists in our institutions.  The Department of Corrections has always followed nationally-accredited standards for housing single-cell inmates that include requirements for natural daylight and contact with others, and out-of-cell time.

“By avoiding a costly trial, the Department saves significant resources that can be further directed towards continuing to provide constitutional healthcare and structured programming to support successful community reintegration.  This is especially relevant in light of the fact that despite the state of California spending nearly $18,000 per inmate for health care costs due to two decades of litigation by the same plaintiffs in the Parsons case, California is still under court supervision and the inmate mortality rate there exceeds that of Arizona.
By contrast, Arizona spends nearly $3,800 per inmate in health care costs.

ADC will monitor its own compliance, thus avoiding costly court oversight, and the Plaintiffs’ attorneys, through record review and on-site tours will confirm compliance, as well. ADC, through its contracted vendor, must meet specific compliance thresholds at its facilities. Within two years, monitoring of performance measures automatically terminates when those performance measures meet agreed-upon thresholds.  ADC can petition the court to terminate the entire settlement agreement after four years.
Posted by Margaret Jean Plews at 9:38 AM