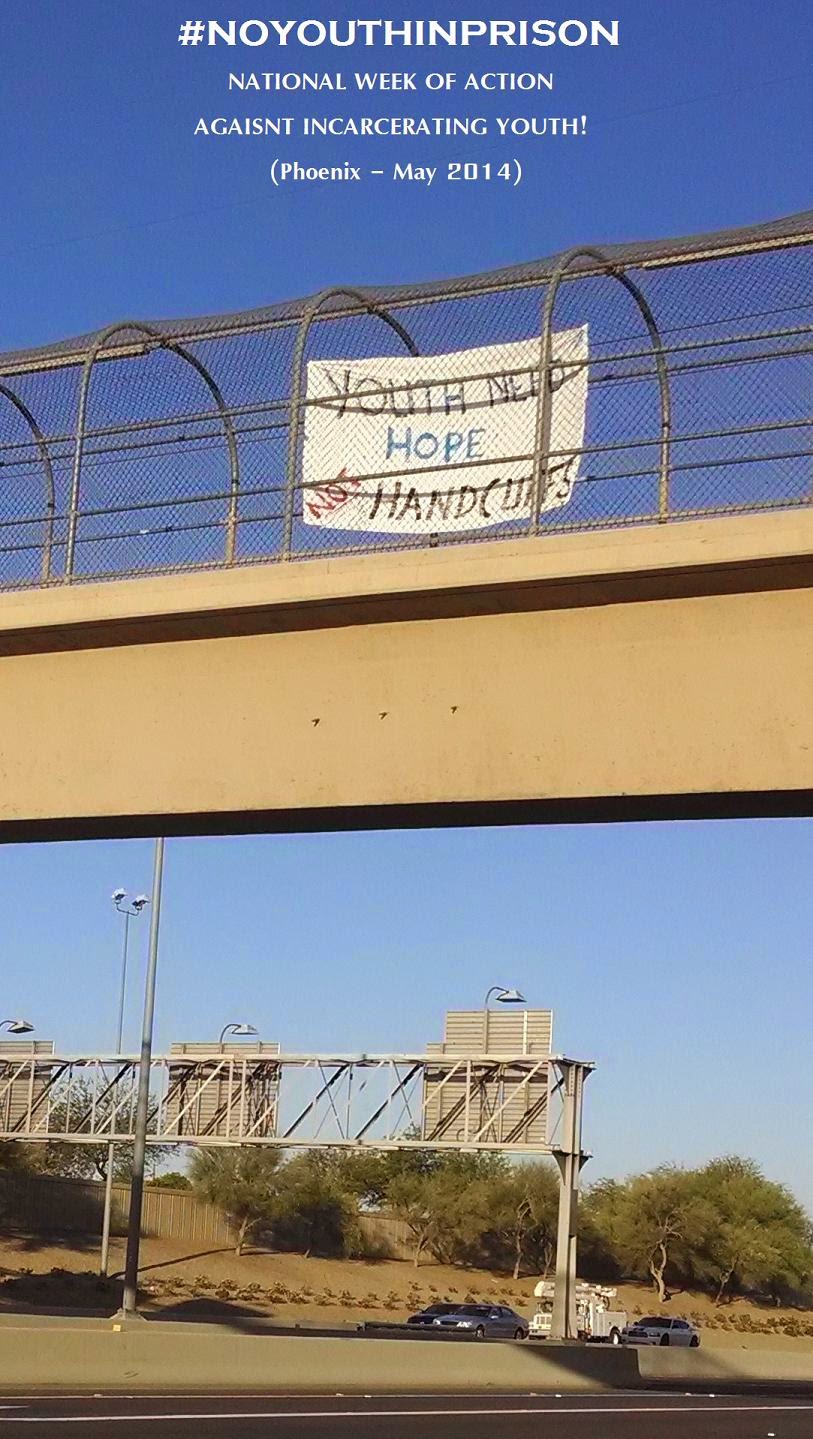 look what I saw over the I-10 today...
it reminded me this is a special week.

There are very few blogs out there about prison abolition - this has got to be one of the best in the US, authored by Mariame Kaba. Go there all week for more focus on liberating criminalized youth.

Sorry I wasn't more organized for this week - it caught me by surprise. Families, take a lesson from these folks in Chicago: Don't settle for crumbs when you fight for change. Don't just try to make the system "better" - that is, stronger. Insist on making our communities smarter on crime instead, so we can end the violence and despair of incarceration altogether.


#NO YOUTHINPRISON week of action

#NoYouthInPrison: Kicking Off National Week of Action Against Incarcerating Youth


If you’ve read this blog even once, you know that I am against prisons. I am particularly against incarcerating children. Today kicks off the National Week of Action Against Incarcerating Youth. 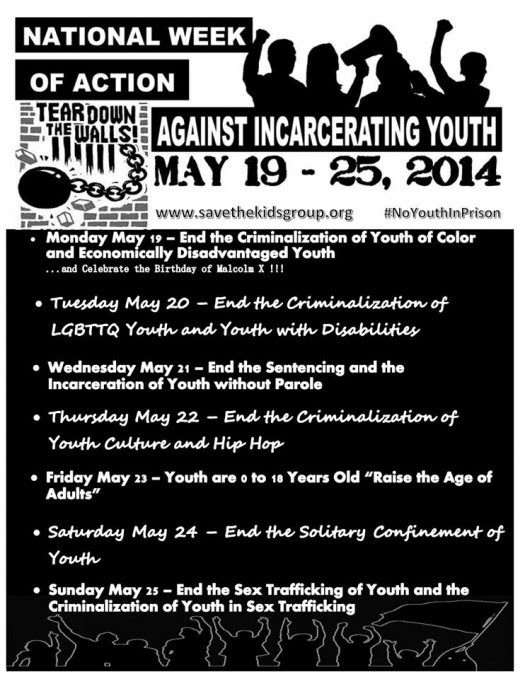 I write a lot about the prison industrial complex (including the juvenile punishment system) and last year I published a paper with my friend Dr. Michelle VanNatta about alternatives to youth incarceration in Chicago. In the paper, we provided a brief literature review about juvenile detention and incarceration. I am republishing that part here to buttress the case against incarcerating young people.

“There is an urgent need to find constructive ways to respond to young people in conflict with the law. Research compellingly demonstrates that youth placed in juvenile detention centers compared to alternative interventions are much more likely to later spend significant time in prison (Aizer and Doyle, 2013). Juvenile and adult incarceration both create exorbitant financial and social costs (Petteruti, Velázquez, and Walsh, 2009).


Incarceration is extravagantly expensive. In 2012, Illinois taxpayers paid an average of $86,861 per year for each youth incarcerated in state prison (Illinois Department of Human Services, 2012). Taxpayers paid an astounding $219,000 per year for each youth confined to the Cook County Juvenile Temporary Detention Center (Civic Federation, 2013). These numbers do not include associated costs, such as government monies used to pay police, investigators, prosecutors, public defenders, judges, court personnel, and others for the arrest, investigation, and adjudication of youth’s criminal cases. Illinois (and the rest of the United States) has made a staggering investment in the criminalization of youth.


Incarceration is traumatic for youth, as evidenced by young peoples’ suicides, suicide attempts, self-harm, and the worsening of mental health symptoms while inside (Hayes, 2009; Ford, Chapman, Hawke, & Albert 2007). The stigma of incarceration follows youth for a lifetime, interfering with education housing, jobs, economic wellbeing, and stable community relationships (Houchins et al, 2009). Disproportionate arrest, prosecution, conviction, and sentencing of youth of color perpetuate and intensify racist injustice throughout the United States (Jones, 2012; US Department of Justice, 2012; Cahn, Nash, and Robbins, 2011). Incarceration can be particularly horrific for gender non-conforming youth, who may be assigned to facilities on the basis physical examinations or identification documents rather than based on the youth’s own gender identity and presentation. Thus, someone who lives in the world as a young woman may be incarcerated at a men’s prison. This exposes the youth to significant danger and trauma (Estrada & Marksamer, 2006).


Finally, there is no conclusive evidence that incarceration in juvenile detention centers safeguards our communities, improves pro-social behavior among those currently or formerly incarcerated, or rehabilitates youth who have engaged in harmful behavior (National Juvenile Justice Network, 2011). Because incarceration is expensive, traumatic, disruptive, and ineffective (Mendel, 2011), exploring alternative strategies for working with youth in conflict with the law offers rich opportunities to promote community well-being while saving money. Carefully implemented, alternatives to detention/incarceration can reduce harm in communities, promote youth development, contain costs, enhance safety, protect human rights, and build a stronger society.”

In short, juvenile detention and incarceration is costly, harmful, and doesn’t improve public safety. We need to STOP LOCKING UP CHILDREN IN JAILS AND PRISONS TODAY.

For our part in Chicago, today we will be kicking off the week of action against incarcerating youth with a march at 5 p.m. Details are HERE. If you are in the city, I hope that you will join us. 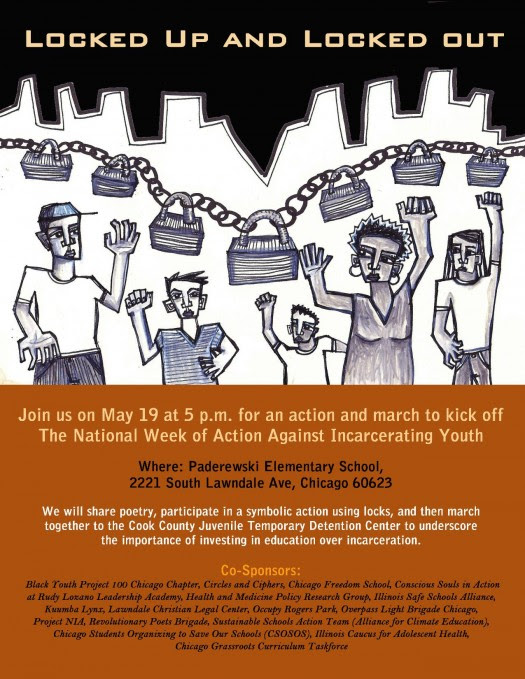 For those in Illinois who are interested in the numbers behind juvenile detention and incarceration, my organization published an updated version of “The Conscious Chicagoan’s Guide to Youth Detention and Incarceration” last week.

Finally, I am always asked for “solutions” as though this is the provenance of a single person. In fact, WE have a collective responsibility of solving our problems TOGETHER. One person didn’t create these problems and they have a long history. It’s going to take ALL OF US to address them properly. Regardless for those in Chicago, I have compiled a list of some ways that you can personally resist the criminalization of young people in our city. Feel free to add your own ideas to the list.