This was an interesting revelation this week. Big shout out to the foks at Wexford for doing us this service. And good for KJZZ for covering it and linking to the original court documents (linked to below) - which families who are fighting for your loved ones rights need to read. 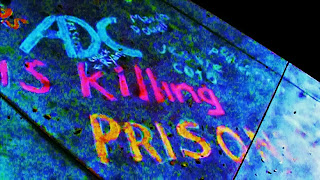 
Arizona Corrections Health System Broken, Says Former Service Provider
KJZZ 91.5
By: Al Macias on 09/25/2013
The company that once provided health care services for Arizona’s 33,000 inmates told state officials the corrections health system “is broken and does not provide a constitutional level of care.” That information came from records unsealed by a federal court on Tuesday.

Wexford Health Sources was hired in July 2012 by the Corrections Department to provide health care for the state prison system. The legislature had ordered the department to privatize prisoner health care in an effort to reduce costs. At the time the state was, and still is, facing a class action lawsuit filed on behalf of inmates who alleged the state was not providing adequate health care.

After a review of the prison system’s health care program Wexford found “the current class action lawsuit to be accurate.”

Dan Pochoda is an attorney with the American Civil Liberties Union representing the inmates.

"They specifically said there were four areas that were required for constitutional care and minimally adequate care, and in all four areas the Arizona Department of Corrections failed," Pochoda said.

Inadequate staffing, training and poor record keeping were among Wexford’s complaints. Two months after the assessment, Wexford and the Department of Corrections agreed to sever the 3 year $349 million contract.

At the time corrections officials blamed Wexford for a variety of problems. DOC spokesman Doug Nick would not elaborate.

"The delivery of health care of comprehensive health care is the subject of ongoing litigation, and the department’s response to any specific allegations will be addressed through the legal process," Nick said.

Meanwhile another provider was hired to serve the inmates, but the ACLU said health care has not improved. It may be several months before the court issues a decision on the lawsuit against the Corrections Department.