YAY for Prison Legal News - which is well worth the subscription, by the way.

Hopefully this means the beginning of the end of the crummy postcard-only policy in the Maricopa County jail system. It really is unduly oppressive and drastically restricts freedom of speech both ways. It being thrown out in one jail doesn't mean that Joe Arpaio will change his policy without a fight, though. It means the prisoners in his jails need to file grievances about the mail policy violating your 1st Amendment rights - appealing them all the way to the top so you are in a position to sue when the last denial comes down - that's called "exhausting administrative remedies" - it shows you're trying to work things out in-house, by policy, before asking the court to settle your prisoner issues.

I know the MCSO is worried about massive quantities of drugs being hidden in children's homemade birthday cards and the like, but I think they should start strip-searcing the guards (who are the biggest source of contraband in most jails/prisons) instead of strip-searching all the prisoner's  mail...they'd find a whole hell of a lot more contraband that way.

Besides, nothing beats a real letter... 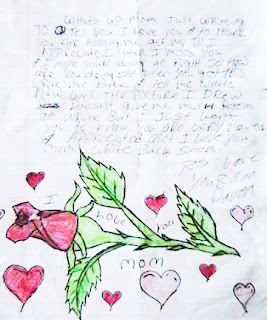 Here's the link to the actual decision

PLN prevails in challenge to postcard-only policy at Columbia County, OR jail

Portland, OR – On April 24, the U.S. District Court for the District of Oregon, Portland Division, held that a postcard-only policy at the Columbia County Jail, which restricted mail sent to and from detainees at the facility to postcards, is unconstitutional. The court therefore has prohibited enforcement of the policy permanently – the first time in the United States that a jail’s postcard-only policy has been struck down following a trial on the merits.

The ruling, by federal judge Michael H. Simon, was entered in a lawsuit against Columbia County and Sheriff Jeff Dickerson filed by Prison Legal News (PLN), a non-profit monthly publication that covers criminal justice-related issues. PLN, a project of the Human Rights Defense Center, sued in January 2012 after Columbia County jail employees rejected PLN’s monthly news publication and letters mailed to detainees. Further, the jail had failed to provide PLN with notice or an opportunity to appeal the jail’s censorship of PLN’s materials.

The rejection of PLN’s publications and letters was attributed to the jail’s postcard-only policy and a policy and practice that prohibited detainees from receiving magazines. PLN contended that such policies violated its rights under the First Amendment, and that the lack of notice and opportunity to appeal was a violation of the Fourteenth Amendment.

During the litigation, the defendants admitted “that inmates have a First Amendment right to receive magazines and inmates and their correspondents have a Fourteenth Amendment right to procedural due process.” However, the jail defended its postcard-only policy and claimed there was no official policy banning magazines at the jail.

On May 29, 2012, Judge Simon entered a preliminary injunction prohibiting the defendants from enforcing their postcard-only policy. He ruled that the policy "drastically restricts an inmate’s ability to communicate with the outside world," and "prevents an inmate’s family from sending items such as photographs, children’s report cards and drawings, and copies of bills, doctor reports, and spiritual and religious tracts." The court also observed that the jail’s postcard-only policy "inhibits rehabilitation," citing a U.S. Supreme Court decision that found "inmate freedom to correspond with outsiders advances rather than retards the goal of rehabilitation." Undeterred, the defendants continued to defend their policy at trial, held from February 5 to 8, 2013.

Following the trial, the district court found in its April 24 ruling that the defendants’ rationales for adopting the postcard-only policy at the jail – preventing the introduction of contraband and saving time during mail inspection – were not supported by the evidence.

The court also determined that jail employees “did not in fact allow magazines to enter the Jail,” and that a ban on magazines was specifically declared in the jail’s inmate handbook, in a jail memorandum and on the jail’s website. Further, "Sheriff Dickerson credibly testified that he did not know that the First Amendment required the Jail to allow inmates to receive magazines when he took office in 2009." The district court therefore concluded that the defendants had a policy and custom of prohibiting magazines, in violation of the First Amendment.

Accordingly, Judge Simon entered a permanent injunction that enjoins the defendants from restricting incoming and outgoing mail to postcards only. "[T]he postcard-only policy creates a hurdle to thoughtful, personal, and constructive written communications between an inmate and his or her unincarcerated family and friends," he wrote. He also declared "that inmates have a First Amendment right to receive magazines and that it would be unconstitutional for Defendants to refuse to deliver magazines to inmates solely because they are magazines," and that detainees and their correspondents have a right to procedural due process when mail is rejected, including notice of the rejection and the ability to appeal same.

"This lawsuit could have been avoided had Sheriff Dickerson not enacted an unconstitutional, harmful policy that limited correspondence to and from detainees to postcards, and had he ensured that jail employees were properly trained as to the First Amendment and due process rights of both detainees and those who correspond with them," stated PLN editor Paul Wright. "Unfortunately he failed in both of these respects, and the court’s ruling is the result."

"The court’s well-reasoned and thoughtful opinion is notice to other jails that a postcard-only policy does not serve a legitimate purpose, and indeed harms the public interest. Jails would do well to steer clear of adopting ineffective policies that violate the Constitutional right of free speech," added attorney Jesse Wing, who represented PLN at trial.


The Human Rights Defense Center, founded in 1990 and based in Brattleboro, Vermont, is a non-profit organization dedicated to protecting human rights in U.S. detention facilities. HRDC publishes Prison Legal News (PLN), a monthly magazine that includes reports, reviews and analysis of court rulings and news related to prisoners’ rights and criminal justice issues. PLN has around 7,000 subscribers nationwide and operates a website (www.prisonlegalnews.org) that includes a comprehensive database of prison and jail-related articles, news reports, court rulings, verdicts, settlements and related documents.