Pissing on the PEAKS: Snowbowl makes the NY Times.

this year, Snowbowl celebrates 75 years by spewing sewage all over the sacred San Francisco Peaks to fatten their purses... 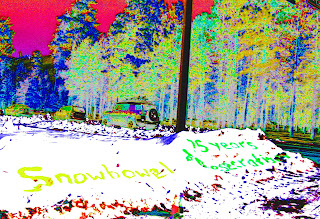 for more on the desecration of the Peaks, see

Thoughts on Snowbowl from the New York Times, below.
Too bad they missed the beautiful action above.

By LESLIE MACMILLAN
After a decade of legal battles, a ski resort in Northern Arizona recently became the first in the world to make artificial snow totally out of sewage effluent. On Dec. 24, Arizona Snowbowl fired up its snow guns for the first time, and to everyone's surprise, the snow that blasted onto the mountain was yellow.
The discolored snow has sharpened an already fraught conflict.

Snowbowl's manager, J. R. Murray, said the problem was caused by rusty residue in the new snow-making equipment that carries the wastewater from neighboring Flagstaff, where it is piped directly from the town's sewage treatment plant.

But Taylor McKinnon of the Center for Biological Diversity, a conservation group, says something seems fishy. "I question whether that explanation is based on tests of the water or conjecture," he said.  "Something's awry, and the onus is on the Forest Service and ADEQ to protect the public and determine the cause." (ADEQ is the acronym for the Arizona Department of Environmental Quality.)

As I have reported, environmentalists and Native American groups have long opposed the ski area's snow-making plan, arguing that the wastewater snow poses risks to public health and the ecology of a mountain considered sacred by 13 American Indian tribes.

Mike Fulton, water quality division director of the state Department of Environmental Quality, said the agency was "looking hard" into several complaints it had received claiming that the presence of the manufactured snow on the slopes violated state laws on the use of reclaimed water, which prohibit ingesting it. Critics argue, among other things, that wastewater snow is being tracked into eating areas and that children are playing in it and touching their faces with it.

The water used for making snow at the ski area is not drinking water. Studies have found that it contains hormones, pharmaceuticals, antibiotics and other chemicals. There is much debate about whether these chemicals are harmful in small amounts.

Regardless, the discolored snow has meant Snowbowl has to contend with a heightened ick factor. Kaelan Monroe, 11, said he went skiing on New Year's Day and that the conditions were "kind of disgusting."

"The snow is crusty and icy and doesn't look very clean," he said. But that won't keep him from Snowbowl, where he has skied since age 3, he said. "I'm not too worried about face-planting in the snow and getting sick," said Kaelan, who describes himself as a proficient skier.

Arizona Snowbowl operates on public land under a special-use permit issued by the Forest Service. In 2005, the agency approved the ski area's upgrade plans, including artificial snow-making, after conducting a long environmental impact study.


That study "did not predict that the snow would be yellow," Mr. McKinnon said.


He said the yellow snow and "a growing list of unforeseen impacts," including new scientific research that indicates harmful chemicals in the wastewater, have rendered the 2005 study obsolete. "Snowbowl would be smart to update the study before they're forced to do so in court," Mr. McKinnon said.
Mr. Murray counters that the excitement over the yellow snow is "a lot to do about a small issue."
"No one here even cares except for those that oppose us," he said.

However, a worker hired just before Christmas for making snow said that his impression had been that the management was concerned about the image problem posed by the yellow snow. The worker, Grayson Lookner, said part of his job had been to drain the snow guns when they were not in use and he was told to drag them into the woods so the ski trails would not turn yellow.

He said he worked there only eight days and then resigned because the work was quite hard and he felt a growing unease. "I didn't feel right about blowing" the effluent "all over a sacred mountain," he said. Snowbowl confirmed that Mr. Lookner was employed by the resort from Dec. 20 to 28.

With climate change and prolonged drought in arid places like the Southwest, the use of reclaimed water is gaining importance as a conservation tool. Snowbowl officials portray the resort as on the cutting-edge of creative water recycling. Opponents argue that economic interests are driving a federal wastewater policy that puts commerce ahead of ecology.

Snowbowl officials have said that, because of reduced snowfall, the resort needs to make snow to stay in business. And so far snow-making has been a boon for the resort, it says. "The skiing is great! The pipes are now cleansed," Mr. Murray said in an e-mail.

State environmental officials say they have sent an inspector to Snowbowl and expect to complete an investigation next week. And Mr. Fulton said the agency had already worked with Snowbowl to construct barriers around the ski lifts to prevent overspray from entering the adjacent forest, where endangered plants grow in the fragile alpine tundra.

Potential harm to that that habitat was the focus of a lawsuit that was recently settled out of court.

To date, the discolored snow has not been tested.
Posted by Margaret Jean Plews at 7:42 AM