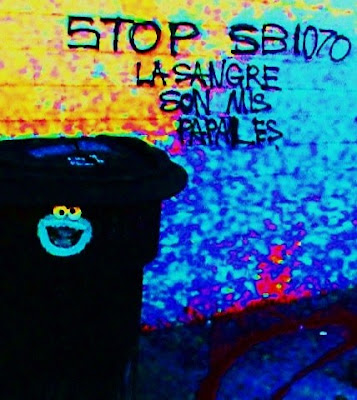 Apparently, America's undocumented immigrants paid $11 billion in taxes last year, while the multinational GE paid NOTHING. No wonder Arizona's economy is still in the gutter - we chased away all the honest, hard-working taxpayers, while cutting extra breaks to freeloading, exploitative corporations...So, thanks a lot SB1070, ALEC, Russ Pearce, and Jan Brewer - and all the idiots who voted for the right wing last election thinking they were protecting their own interests. You screwed us all.

These households may include members who are U.S. citizens or legal immigrants. Collectively, these households paid $11.2 billion in state and local taxes. That included $1.2 billion in personal income taxes, $1.6 billion in property taxes, and $8.4 billion in sales taxes. The states receiving the most tax revenue from households headed by unauthorized immigrants were California ($2.7 billion), Texas ($1.6 billion), Florida ($806.8 million), New York ($662.4 million), and Illinois ($499.2 million) {See Figure 1 and Table 1}. These figures should be kept in mind as politicians and commentators continue with the seemingly endless debate over what to do with unauthorized immigrants already living in the United States. In spite of the fact that they lack legal status, these immigrants—and their family members—are adding value to the U.S. economy; not only as taxpayers, but as workers, consumers, and entrepreneurs as well.