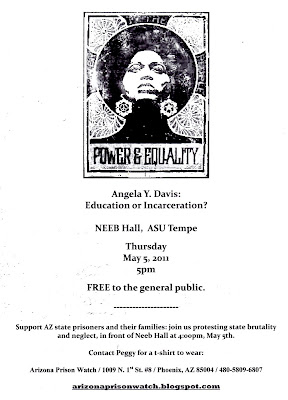 Noted scholar, activist and author Angela Y. Davis, who once spent 18 months in jail herself in the early 1970s, will discuss her ideas about incarceration during a free lecture at 5 p.m., May 5, at Neeb Hall, Arizona State University.
Davis’ talk is titled “Education or Incarceration? The Future of Democracy.” It will be followed by a question-answer session moderated by Gregory Sale, whose exhibition "It's not just black and white" is currently on view at the ASU Art Museum. There will be a reception following the lecture at the ASU Art Museum, and Davis will sign copies of her newest book, “Are Prisons Obsolete?”
Davis gained fame – and notoriety – in the late 1960s and early ‘70s when she was involved in the black power politics of that era. She joined the Communist Party when Martin Luther King was assassinated in 1968. She was active with SNCC (Student Nonviolent Coordinating Committee) and the Black Panthers. She was arrested as a suspected conspirator in the abortive attempt to free George Jackson from a courtroom in Marin County, Calif., and was eventually acquitted of all charges.
Since then, Davis has taught at universities such as UCLA, Vassar and Stanford, and is a professor emerita of history of consciousness, an interdisciplinary Ph.D. program, and professor of feminist studies.
Davis also has been involved in the nation’s quest for social justice. She has written eight books, and her most recent theme has been the range of social problems associated with incarceration and the generalized criminalization of those communities that are most affected by poverty and racial discrimination.
She currently works with Justice Now, which provides legal assistance to women in prison, and engages in advocacy for the abolition of imprisonment as the dominant strategy for addressing social problems. Internationally, she is affiliated with Sisters Inside, a similar organization based in Queensland, Australia.
"In thinking about the possible obsolescence of the prison," Davis writes, "we should ask how it is that so many people could end up in prison without major debates regarding the efficacy of incarceration."

Davis argues that “the very future of democracy depends on our ability to develop radical theories and practices that make it possible to plan and fight for a world beyond the prison industrial complex.”
The lecture is sponsored by Project Humanities in conjunction with the Herberger Institute for Design and the Arts.

Posted by Margaret Jean Plews at 8:48 AM