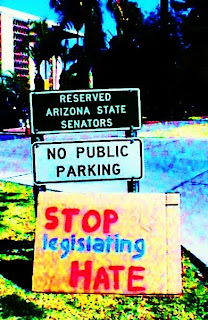 This is a great report to arm ourselves with; people need to know more about the think tanks spitting out the racist garbage that becomes law in this land. Is it any surprise that the people the AZ Me Party Senate President gets his brilliant immigration legislation from are so closely affiliated with hate groups? Pearce and Burges should be ashamed of themselves - but then this is Arizona - they're heroes to the white supremacists who think they own this state. I believe Pearce quotes FAIR directly for his propaganda campaigns all the time...

The coalition of state lawmakers seeking to undermine the 14th Amendment’s birthright citizenship protection includes a dozen legislators who embrace a raft of radical beliefs, including conspiracy theories about supposed government concentration camps and claims that President Obama is a foreigner.

Attacking the Constitution: State Legislators for Legal Immigration & the Anti-Immigrant Movement profiles 12 leading members of State Legislators for Legal Immigration (SLLI), which has announced a national campaign to end the 14th Amendment’s guarantee of citizenship for all children born in the United States. The group is also pushing a number of other harsh, anti-immigrant proposals in states across the country.

"The radical beliefs of SLLI members parallel their radical agenda – rewriting the 14th Amendment," said Heidi Beirich, research director for the SPLC and author of the report. "The fact that we're talking about people who wield real political power should scare everyone who cares about our constitutional ideals."

SLLI, which has about 65 members in 40 states, was founded by Pennsylvania state Rep. Daryl Metcalfe in 2007. The group works closely with the Federation for American Immigration Reform (FAIR), which the SPLC has designated as an anti-immigrant hate group because of its white nationalist agenda and ties to racist groups.

Metcalfe has said that immigrant parents "live the life of a criminal" and should have their children taken away. He has routinely demonized undocumented immigrants as criminals, despite studies that clearly show immigrants are on average much less criminal than native-born Americans.

Metcalfe once denounced Pennsylvania's Domestic Violence Awareness Month as part of the "homosexual agenda" because it included men as possible victims of domestic violence. He characterized military veterans concerned about climate change and foreign energy dependence as traitors promoting a "leftist agenda." And, like others in the so-called "birther movement," Metcalfe has cast doubt on Obama's U.S. citizenship.

It includes these details:

"Not all members of this coalition have voiced such radical opinions, but by virtue of pursuing this attack on the 14th Amendment, they all have signed on to an attempt to radically reinterpret the Constitution – an attempt that one conservative commentator accurately described as a fool's errand," Beirich said.

SLLI contends that the 14th Amendment has been misapplied to grant automatic U.S. citizenship to the children of undocumented immigrants. But it is clear from the record of debate in Congress leading up to the amendment's adoption in 1868 that its sponsors did intend for the amendment to cover the children of non-citizens, including Gypsies, perhaps the group most analogous to today's undocumented immigrants, as well as Chinese immigrants, who retained citizenship in their home countries, were present in large numbers and were barred from naturalization.