An Atrocity of Justice: Imprisoning the Innocent. 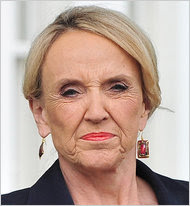 WASHINGTON — Ronald Kempfert was a young boy in 1975 when his father was sent to prison for murder, and they had no contact for 28 years. Then, in 2003, Mr. Kempfert heard from a lawyer who had been looking into the case. “Your father is innocent,” said the lawyer, Larry A. Hammond. “And we’re pretty sure your mother framed him.”

That would seem a lot to digest, but Mr. Kempfert, 42, said he felt no hesitation. “My reaction was that it didn’t surprise me,” he said. “She’s my mother, and I love her. But I think she’s capable of anything.”

Mr. Kempfert is now certain that his father, William Macumber, is innocent. Arizona’s clemency board, citing Mr. Kempfert’s “very moving testimony” and saying there had been “a miscarriage of justice,” unanimously recommended last year that Mr. Macumber be freed.

But Mr. Macumber remains in prison, and Gov. Jan Brewer has refused to explain why.

The case against Mr. Macumber began in 1974 as his marriage was disintegrating. His wife, Carol, who worked in the local sheriff’s office, went to her superiors with a surprising story. Her husband, she said, had recently confessed to the unsolved murders of a young couple shot to death a dozen years before, in 1962, in the open desert north of Scottsdale, Ariz.

Largely on the strength of his former wife’s testimony, Mr. Macumber was convicted and sentenced to life without the possibility of parole.

But the jury did not hear a significant piece of evidence.

In 1967, five years after the murders in the desert, a drifter named Ernesto Valenzuela was charged with a similar double homicide. He told his lawyer that he had also killed the couple in the desert.

“He was just making a point about bragging about the people he killed,” the lawyer, Thomas W. O’Toole, said. “He was a cold-blooded killer who relished committing the murders.”

Mr. O’Toole, who went on to serve 24 years as a state judge, said his client was dead serious about claiming responsibility for the 1962 murders. “There is no doubt in my mind that Ernesto Valenzuela committed those crimes,” Mr. O’Toole said.

For years, Mr. O’Toole kept his client’s secret, as he was required to do by the canons of legal ethics. But after Mr. Valenzuela was himself killed in prison in 1973, and with the permission of Mr. Valenzuela’s mother, Mr. O’Toole offered to testify at Mr. Macumber’s trial.

The judge refused to let the jury hear from Mr. O’Toole, saying his account was unreliable hearsay. The judge also excluded testimony from a second lawyer and a psychiatrist who had heard similar confessions from Mr. Valenzuela.

The jury did hear about two kinds of physical evidence — a partial palm print and bullet casings — that prosecutors said connected Mr. Macumber to the killings.

Mr. Kempfert said he believed that his mother had done more than lie.

“I can fully see how my mother could have set him up and framed him,” Mr. Kempfert said. “She had access to the evidence. She was doing fingerprint courses at the time.”

Last year, the five members of the Arizona Board of Executive Clemency unanimously recommended to Ms. Brewer that Mr. Macumber be released after 35 years in prison “to correct a miscarriage of justice.”

But Ms. Brewer rejected the board’s recommendation without explanation in November. It is possible that politics played a role in her decision; Ms. Brewer, a Republican who became governor last year, is running for a full term in November.

“She denied the application right after she announced that she was running for governor,” said Katherine Puzauskas, a lawyer with the Arizona Justice Project at the Sandra Day O’Connor College of Law at Arizona State University. The project, which was founded by Mr. Hammond and works to overturn wrongful convictions, has represented Mr. Macumber since 2000.

There is little political upside to granting clemency, but there is a substantial risk, as Mike Huckabee learned when a man whose sentence he commuted as governor of Arkansas in 2000 killed four police officers last year.

P. S. Ruckman Jr., a political science professor at Rock Valley College in Rockford, Ill., has been fuming about Ms. Brewer’s handling of the Macumber case. “I have been following state clemency for 30 years,” Mr. Ruckman said, “and this is easily, easily, the most disturbing. It’s borderline despicable.”

“Common-sense notions of justice should compel a governor to provide an explanation for imprisoning a man deemed innocent by an official board created to make such judgments,” he added. “You don’t imprison a man for no reason.”

A spokesman for the governor said Ms. Brewer had reviewed the case thoroughly, but he provided only boilerplate concerning her reasoning.

“Every executive clemency case is carefully scrutinized as the governor balances the very real and important concepts of public safety, justice and mercy,” the spokesman, Paul Senseman, said in an e-mail message.

Mr. Macumber is 74 and in failing health, with heart problems and arthritis, and the threat he poses to public safety is not obvious.

But Mr. Macumber’s former wife, now known as Carol Kempfert, said he was a dangerous sociopath who deserved to die in prison. She denied making up his confession and tampering with the evidence used to convict him.

It is her former husband, she said, who is a pathological liar. “I was in law enforcement for almost 20 years, and no one came close to being able to manipulate like Bill,” she said. “This man could sell water to a drowning person.”

Mr. Macumber, she said, would have said anything to save their marriage.

For instance, she said, he once falsely claimed to have a heart condition. “He intimates that if I hang around long enough, he’ll die and I’ll get the insurance money,” she said. “Well, I hung around, and he didn’t die.”

Then he threatened to kill himself. “If you’re going to do it, go outside” she recalled telling her husband. “I don’t want blood on the walls.”

In the course of a half-hour conversation, Ms. Kempfert accused Mr. Macumber of terrible and disturbing crimes beyond the killings in the desert. Asked if he deserved clemency, she said, “Absolutely not.”

“Actually,” she added, “I think he’s lucky. If he had been caught sooner, he would have gotten the death penalty.”

Ms. Kempfert and her son no longer speak. Ronald Kempfert, who took his stepfather’s last name when he was a child, is in the process of changing it back to Macumber.

Posted by Prison Abolitionist at 6:34 PM