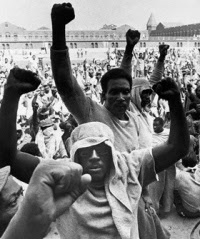 Remembering the Attica Uprising
Posted on September 8, 2009 by denverabc
(from the Denver Anarchist Black Cross)


Attica Rebellion: 38 years ago, a massive prison rebellion in the Attica Correctional Institution in New York reshaped national liberation movements and the growing movements against prisons in the United States.


On September 9, 1971, responding to the death of black liberation prisoner George Jackson in California’s San Quentin Prison, about 1,000 of the approximately 2,200 prisoners rebelled and seized control of the prison, taking thirty-three correction officers hostage.


During the following four days of negotiations, authorities agreed to 28 of the prisoners’ demands, but would not agree to demands for complete amnesty from criminal prosecution for the prison takeover, or for the removal of Attica’s superintendent. Under order of then Governor Nelson Rockefeller, state police took back control of the prison. When the uprising was over at least 39 people were dead, including ten correction officers and civilian employees.

Email ThisBlogThis!Share to TwitterShare to FacebookShare to Pinterest
Labels: attica